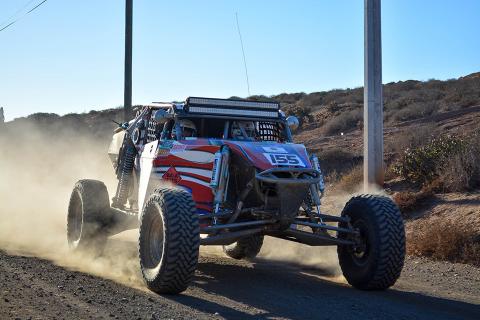 The Baja 1000 is a Mexican off-road motorsport race held each year on the Baja California Peninsula. The race was founded by Ed Pearlman in 1967 and is sanctioned by SCORE International. It is one of the most prestigious off-road races in the world, attracting competitors from Argentina, Australia, Bahamas, Brazil, Belgium, Canada, England, Finland, France, Germany, Guam, Guatemala, India, Italy, Japan, The Netherlands, New Caledonia, New Zealand, Russia, Saudi Arabia, South Africa, Spain, Sweden, Switzerland, Uruguay, The Balkans, and from every state in the United States, as well as the host country of Mexico. The race is the final round of a four-race annual series, including the SCORE Desert Challenge, the SCORE San Felipe 250 and the SCORE Baja 500. The 2017 Baja 1000 marked the 50th anniversary of the race.